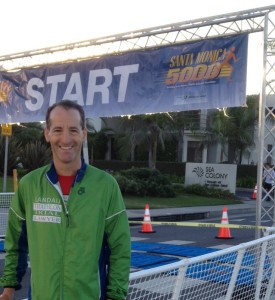 Last week lawyer Landau ran his longest race, over twice the distance of the 5 Kms. races he has been competing in since he returned to running in April. With the”Valley of the Moon VIntage Harvest Festival  Sonoma vineyard 12 km. under his belt, the adventurous attorney signed up for the competitive Santa Monica 5,000. This race awards prize money, has a field of over 1,500 and draws top runners from all over the world. But the Herndon injury lawyer had his sights not on the best Southern California racers, but on testing his DUathlon fitness by running the last 3 miles of the 10 km race as well. In other words, Landau would have about 20 minutes between the end of the 5km and then catching the field at mile 3 in the 10km, since this was a “point to point” course finishing at the Santa Monica Pier.  If he could pull off this “double” then it would demonstrate his DUathlon training was progressing toward the October 26th USAT National Championships in Oro Valley, Arizona.

Landau managed a 20:43 in the first leg, averaging 6:41/mile, and then 7:23 for the 2nd 5 km. Later that night, after visiting with family on the Left Coast, he hopped a “red eye” so as to be in Court in Manassas Virginia the next morning with a Warrenton family that was struck by a drunk driver near Nissan Pavilian. The “on the go” lawyer then traveled to New Jersey on Wednesday, participated in the second session of a Mediation in Connecticut and then celebrated his sister’s charitable giving award in New York City before hopping a late night train back to Washington, D.C., where he attended an anatomy course for lawyers presented by the Trial Lawyers Association of DC. Notes Landau, “the best trial lawyers, like the best runners and cyclists, are always trying to improve, test themselves and stay on the cutting edge of their field.”