After struggling with injury, and unable to train at top speed in preparation for the 2016 USAT Sprint Duathlon National Championships, Herndon Virginia lawyer Doug Landau nevertheless made the trip to Bend, Oregon in order to once again qualify for the ITU Duathlon World Championships. A windy, hilly course, at altitude, would present a challenge for lawyer Landau, who has done well in local and regional competition, but was not at the level of fitness he had planned for when setting his goals for 2016. Remembering the phrase, “half of winning is just showing up,” and relying on his experience at top level competitions, Landau ran (and drove) the 2-lap “up & down” run course. Landau also drove and biked the 6 mile uphill (at 4% grade, climbing 1,200 more feet in addition to being at 3,700 feet above sea level & Washington, D.C.) and then 6 mile down hill bike course in the days leading up to the big race, so that he would be familiar with the terrain. While biking from the transition area several days before the big race, Landau passed dozens of young, extremely fit cross country skiers on rollers training on the slope and altitude!

Once again the experts at Green Lizard Bike Shop in Herndon had adroitly packed the “Lawyer Landau” Cervelo racing bike for shipping to the West Coast, and the pros at Race Day Transport re-assembled the carbon frame and wheels so that Landau’s bicycle would be “race ready.” Additionally, he underwent taping of his legs by professionals at the K-T physio tape expo booth, bought some warmer clothes and made sure to stretch, nap, taper, hydrate and load up on salts in anticipation of a difficult competition. As Landau noted to his mates back in Virginia, “the hay is in the barn, no use worrying about what could’ve or should’ve been, the work that’s done is done.” 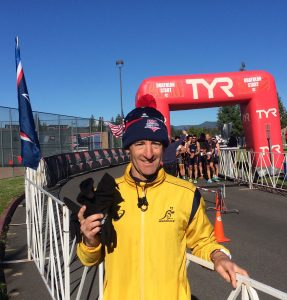 The USAT rotates venues for national championship events, so Landau has competed in the Duathlon’s top Run-Bike-Run races in Ohio, Richmond and Minneapolis/St.Paul. Having this year’s event in the Pacific NorthWest would be a good prequel to the 2017 World Championships in Penticton, Canada. The top 8 in each age group automatically qualify for Worlds. After that, there is a”roll down” process, but slots are not announced until the late Fall, and none of the finishers after the top 8 are assured of making TeamUSA. So while Landau was not expecting to be on the podium like last year, when he finished 3rd, his goalfor 2016 was to finish in the top 8.
Stay tuned…