Even the best prepared athletes find that their safety and injury prevention equipment is not “race ready.” It is a terrible feeling to train for months, travel hundreds of miles and to arrive at the race venue only to find that a vital piece of safety gear is broken or missing. Doug Landau has had goggles break, wetsuits rip and bicycles flat at major sports competitions, so he knows what it feels like to be physical ready, but unable to compete.

Last Friday, after the Herndon Reston sports injury lawyer picked up his bike and triathlon racing gear from Velocity Pro bicycle shop, he saw that another competitor had a cracked bicycle helmet. Her damaged “aero” bike helmet would never pass the USAT officials’ inspection and she would not be permitted to race with such unsafe equipment, as her head gear would not protect her skull from impact and potentially severe brain injury. 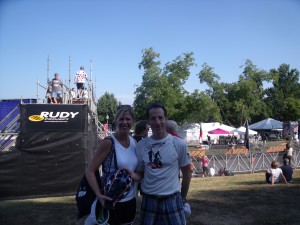 As he has done before, Landau offered her a helmet, since he often travels with spare safety equipment. The West Coast Athlete graciously accepted lawyer Landau’s offer, as was back in the race. The next day her sister returned the Virginia bike safety lawyer’s helmet, and they cheered the other bicycle racers participating in the US National Triathlon Championships. If you have room in your bike travel case, car, luggage, etc., consider bringing extra safety equipment. You too may be alb to help out a fellow athlete and prevent unnecessary injury or disability.

2 responses on “Check out a bike, loan a helmet”