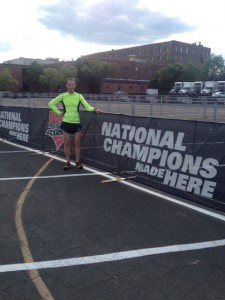 However, in addition to putting on competitive, challenging and fun events, USAT needs to be concerned for the safety of all participants.

In the race recently completed by lawyer Landau, an athlete competing with the metallic Cheetah lower leg, like the one Oscar Pistorius used in the Olympics, was admired by all of the athletes, but was a potential danger when someone’s hand came close to the thrashing lower limb during the swim. Especially in conditions of poor water clarity, such a prosthetic device could be extremely dangerous. Race directors can make accommodation for all sorts of “nontraditional equipment.” However, an all-out ban on recumbent bikes would prevent people with cervical neck surgery, severe scoliosis, limited spine mobility, or compromised lumbar spine to compete in multi-sport events.

Ensuring the bikes’ visibility during the bike event with flags, as well as mandating that all passing be done with an audible signal, would increase the safety of recumbent racing. Furthermore, recumbent racing bikes would be low to the ground, reducing the likelihood of falling, or wiping out. Since recumbent bikes are a bit wider than regular racing tri bikes, directors of races with very narrow roadways would need to look at their race course to see if it is feasible.

As our population ages, three-wheeled bikes may become the only way that an older athlete can compete in the bicycle portion of a race. These are not much wider than the three-wheeled chairs used by paralyzed athletes for the run portion of such races as the Boston Marathon and the Ironman triathlon.  Herndon lawyer Doug Landau’s own cousin competed in a North California triathlon using a wheelchair for the run, a “handi-bike” that was in a recumbent bike configuration, and swimming on his back. “It is feasible, commendable, and replicable. I think the emphasis should be on inclusion in the sport, not exclusion,” notes Landau.  What do you think ?