A 7:30 AM start in 30-degree weather and a 1 mile uphill start was definitely not the best conditions for TheAthletesLawyer, who tends to race best in hot, flat and fast conditions. In fact one of the participants noted that weather any colder than this can cause brain damage and frost-bite to those used to warmer conditions. This cross-country run, which has traditionally been sponsored by the Garver Law Office in Reston, has seen 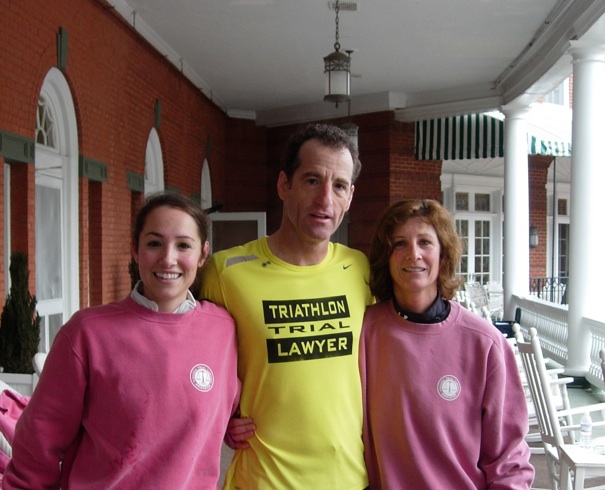 Triathlon Trial Lawyer Landau of Herndon sometimes win and sometimes finish as the runner-up. This sporting event is sponsored by friend. co-counsel and sometime training partner Steve Garver. In prior years, the “Triathlon Trial Lawyer” was runner up to 4:17 miler Davis Barry, who is now a senior in high school, and the son of the Allen firm’s managing partner Doug Barry of Fredericksburg. However, with the younger Barry out injured, The Athletes Lawyer was able to hold off 2 challengers, whose combined age was still less than half of Landau’s ! While the lead changed several times in the opening miles, and Landau took several wrong turns on the hilly, cross country course, he managed to come in first place and then run back to escort his wife and daughter to the finish line ! He is shown here with his wife and eldest daughter, who has been training at Virginia Tech with her brother in order to be ready for next week’s Ukrops Munument Avenue 10km. in Richmond, which is also the 2008 National 10km. Road Race Championship.