The Race to Stop Traffick sounds like an event to protest cars and traffic jams in Northern Virginia. Instead, this running event is a fundraiser for a very worthy cause. The 2018 Race to Stop Traffick benefitted “Operation Underground Railroad” (“O.U.R.”).  O.U.R. is a non-profit organization whose mission is to rescue and help rehabilitate children from human trafficking. There was a one mile Fun Run as well as a timed 5K that took runners over a hilly, well-marked course at Bull Run Regional Park. Families and kids participated in post-race festivities that included carnival games, a magic show, face painting, firetrucks, Marine armed personnel carrier, and the very popular raffle booth. 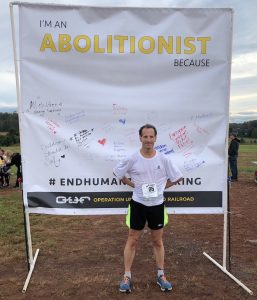 Seeing an opportunity to run on dirt and grass instead of pavement, lawyer Doug Landau entered to see what he could do now that his triathlon season is over. Staying near the front throughout the race, lawyer Landau finished 5th overall, and was the first master, even though he averaged close to 7:15/mile. Because the weather held, Landau ran several more miles around the park’s grounds. The folks at Potomac River Running provided packet pick up and race timing, and veteran race support expert and runner Tom Cook had the roadway cone collection done by the time the awards ceremony was beginning! This was a fun family event, and with its late morning start, it is likely to become a very popular fixture on the Northern Virginia running circuit. If you are looking for fun family running event next fall in Prince William County, consider the “Race to Stop Traffick.”