“Training and Racing with a Power Meter” arrived at the Herndon law firm Abrams Landau, a gift from an Airbus executive from France. Triathlon Trial Lawyer Doug Landau had helped a friend get into one of the uber-challenging HPC CompuTrainer classes when the good French doctor was in town. Landau had been training with a heart rate monitor for years, but the Watts (power) based bike training only began when Susan Hefler and Pierre Pelletier opening their HPC facility next to the Great Harvest Bakery. Since then, Landau has pedaled through the winter, challenging himself against “roadies,” Junior and Masters cycling champions. 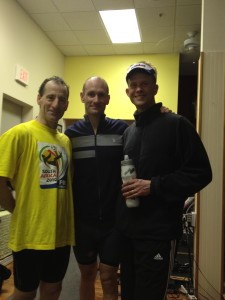 After having read about a third of this technical book, Landau notes, “this is one of the few sports training books that I have read that has advanced sports medicine, training regimen and sound science.” As a direct result of what he learned from the book, Landau had his 5 minute, 1 minute and 5 second maximum Watts tested, to go along with his 20 and 60 minute FTP (“Functional Threshold Power”) test numbers. He also underwent SpinScan testing and learned from Mr. Pelletier how to make his bicycling pedal stroke more fluid and powerful. So if you are interested in taking your cycling to the next level, check out HPC if you are local, and/or look into this Velo Press book.