We have been fortunate at Abrams Landau to represent some truly remarkable and inspiring individuals. For the Atheletes Lawyer Doug Landau, this was such a case… 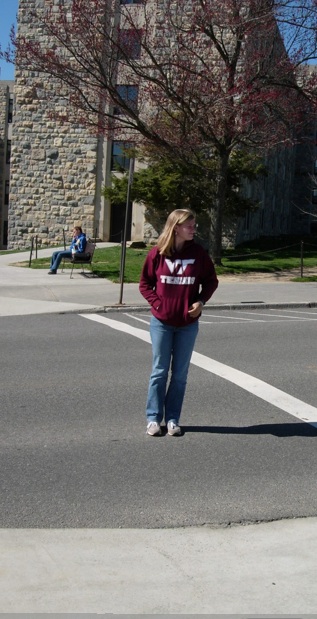 The plaintiff was a student at Virginia Tech in Blacksburg, Virginia. She was walking in the pedestrian crosswalk when, without warning, the defendant slammed into her, hurling her through the air and onto the pavement.

As the plaintiff lay on the ground, officers took photos of the dents and damage to the defendant’s pickup truck made by the 19-year-old girl’s body.

Herndon Lawyer Doug Landau’s young client (shown here at the site of the crash in the center of the Tech campus) sustained a fractured collarbone, compartment syndrome and multiple contusions.

Because the defendant and his insurance company would not accept full responsibility for this event, the athletes lawyer filed suit in the Circuit Court of Montgomery County. More…The plaintiff was followed by VCOM’s (Virginia College of Osteopathic Medicine) Dr. Michael Sampson. This young Abrams Landau client was an outstanding young athlete; she had never been injured before. What is more remarkable, she had overcome being born with no left arm below the elbow.

The Athletes Lawyer assembled the evidence of the fact that this injured client was a nationally ranked in her precollege career, using a prosthetic arm and hand to toss the ball. Trained at the Smith Sterns Tennis Academy in Hilton Head Island, S.C., by none other than U.S. tennis champion Stan Smith, she utilizes a one-arm backhand, a perfect drop shot, serve, and topspin backhand that enabled her to play at the highest levels of amateur tennis. Because of the time loss caused by her campus crash injury, the injured pedestrian had to take summer-school classes according to staff at Abrams Landau, Ltd.

How did the Athletes Lawyer present evidence of damages when the injured athlete’s medical bills were covered by insurance and the University and she was not “employed” at the time of the crash ? (Continued tomorrow…)