Bicyclists have similar duties (https://www.virginiadot.org/programs/bk-laws.asp) to a motor vehicle when on the road. There is a legal duty to drive at a reasonable speed and to keep a reasonable lookout for other vehicles. They must also take care to pass bicycles at a safe distance and speed. The Virginia Code (https://leg1.state.va.us/cgi-bin/legp504.exe?000+cod+46.2-839) provides that any driver overtaking a bicycle, when going in the same direction, must pass at a reasonable speed and at least two feet to the left of the bicycle. 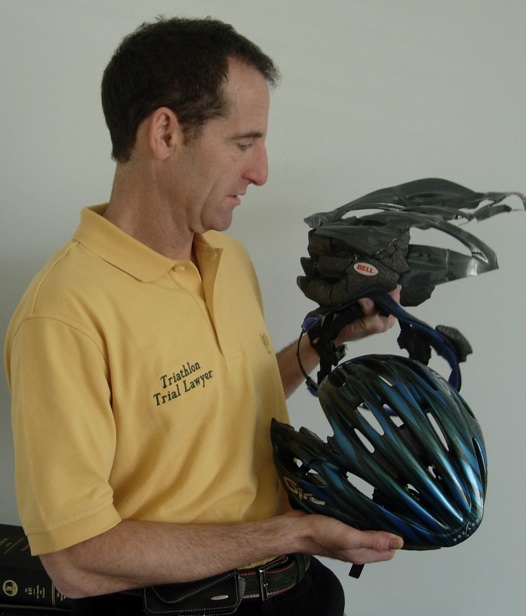 When a cyclist is cut off or driven off the road, problems of proof can prevent an injured plaintiff from legitimate recovery for their loss. Objective proof, eyewitness testimony and/or physical evidence can help in a bicycle negligence case where the 2 foot zone and/or contact is disputed. [TriathlonTrialLawyer Doug Landau shown with the remnants of 2 bicycle helmets after bike crashes injured and disabled Abrams Landau clients.]

In one case, Fleeter v. Cawthorn (https://www.landaulawshop.com/pi_cases.asp#1), handled by TriathlonTrialLawyer Doug Landau, the Defendant motorist denied contact with the injured cyclist, who was traveling in the second position in a line of three cyclists on a two-lane road. That last rider of the trio, had been struck just moments prior to the tortious impact, as the driver did not pass with the two foot minimum safe distance. When cyclists are riding, as is often the case, in a pace line or “peloton,” another issue that arises is whether there is one accident or incident or two. The Fleeter case settled after it came to light that the Plaintiff’s witness had the bicyclist’s side mirror and several “scene depositions” showed the topography of the roadway.
As in most car versus cyclist cases, visibility and lines of sight are important issues. Even where the cyclist has the “clear line of sight,” recovery can still be had where the motorist is in violation of statute or other rules of the road. During the cycling portion of a well-known triathlon, a competitor was struck by a car within sight of the finish line. Colosi v. Willis, Cambridge, MD (2004). The motorist chose not to continue waiting despite signage and race volunteers. The resulting personal injury claim was not against the race directors or event promoters, but solely against the Defendant driver. Fortunately, as the plaintiff was in top physical shape, like many of our other client-athletes, he made an almost full physical recovery.
Critical to the success of both cases were personal inspection, familiarization, photographing and measurement of the scene as well as preservation of the physical evidence. It is also important to have documentary proof of the worth of the bicycle, as top end models can cost more than the cars that struck them!