crossing the finishline after his 525 yard swim and 3.1 mile cross country run efforts just in time to jump in the pool and swim the opening leg and then jog alongside his daughter ! The race takes place on the beautiful campus of the Madeira School in McLean. He usually “spots” the fast high school swimmers several minutes by getting lapped in the pool. But once on dry land, the fleet-footed “Trial Lawyer Triathlete” uses his experience and strength to “reel in” all the fish that thought they had “gotten away !”

While the “Triathlon Trial Lawyer” is often in the hunt for the top overall prize, two years ago he competed in, and WON the Sport & HealthClubs annual “Super Sprint Triathlon” at 7 AM and then, after collecting hisawards, began the Madeira Biathlon at 10 AM, winning his age group and finishing 4th overall ! He then went to a well-deserved lunch with faculty members with whom he has worked as a Science Fair Judge. We know of no other athlete who competed in TWO multisport races in different cities on the same day. And to be a winner in both, suggests that maybe Doug Landau is as good of a triathlete as he is Trial Lawyer. 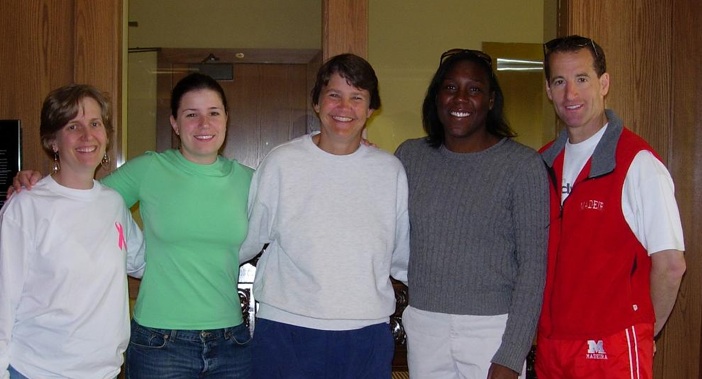 [CAPTION: Triathlon Trial Lawyer (and Science Fair Judge) Doug Landau shown with the super faculty members of The Madeira School, where he had a much-deserved brunch after winning the Sport & Health Club’s “Super Sprint Triathlon” in Herndon and then his age group at the CBTF Spring Biathlon at the School’s McLean campus that same morning !]