Interestingly, after I got back from court after representing the “MS-8” bicyclists at the Loudoun County Courthouse, I was contacted by another cyclist ticketed for “running through a stop.” She is 11. Her mother called from New York. This young girl is in the hospital. Her pelvis is fractured. According to an eyewitness, the driver: saw the child biking; knew this girl was in the area on her bicycle; thought the young bicycle rider was through the intersection when his truck hit the back end of her rear tire. The police arrived, saw the truck crash scene sent for an ambulance for the child who was thrown some distance from the crossing area and then ticketed the child. 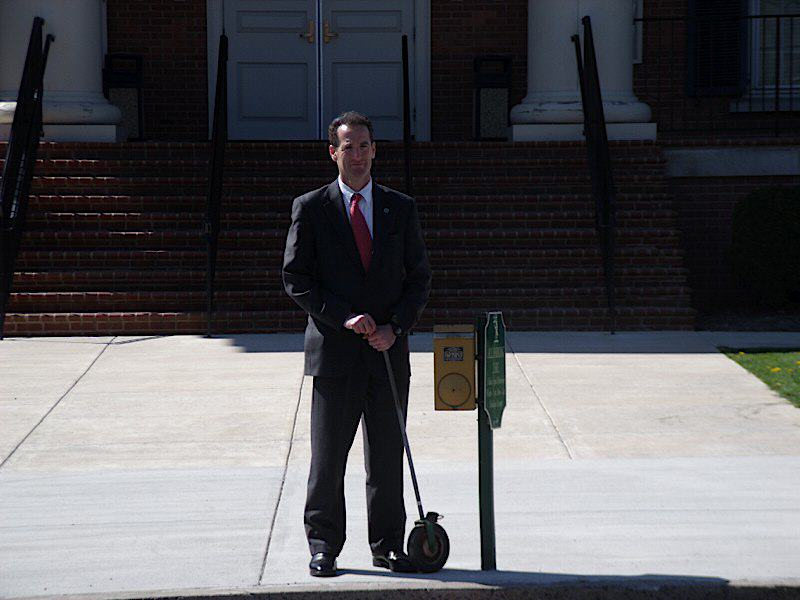 I have been fortunate enough to win this kind of case for a pedestrian here in Herndon, who was struck by a Police Department Dispatcher on her way to her Police Academy Graduation, and whose co-workers from the police force charged my client with not stopping ! The largest personal injury law firm in Virginia turned the case down and suggested the injured walker call the Landau Law Shop. Loudoun, Fairfax and Leesburg cyclist, walker and runner injury lawyer Doug Landau is shown to the left with his measuring wheel after marking off a pedestrian accident scene.  Our client, a French national, did not drive, but walked or took the Metro everywhere. This elderly gentleman’s shoulder was shattered. We were able to present eyewitness testimony and photographic evidence. Our exhibits demonstrated the fact that the pedestrian was visible at all times; that he was walking slowly; and, that he was walking from curb apron to curb apron, in a straight line, across a street with no crossing lines. The Fairfax County Circuit Court judge found in our favor. However, more important than the judgment in our client’s favor for restitution for his medical bills, time loss, pain, scarring and permanently damaged arm, was the fact that despite the conviction in the District Court for the ticket, he was vindicated in the civil case. Many of our cases involve righting “wrongs” as well as winning reimbursement for what has been taken from our innocent clients.

One response on “Bicyclist, age 11, struck by truck charged with failing to stop at stop sign suffers broken hip AND gets a ticket”