Did you know you could get FOUR POINTS on your driving record for slowly rolling to a near stop at a stop sign in your bicycle ?

Doug Landau represented bikers who were ticketed for going through a stop sign in Loudoun County. A total of eight cyclists were stopped for this offense (Virginia Code 46.2-821). Four plead guilty and sent in their fines. One went to court, without Landau’s assistance, was convicted, sentenced to a fine, court costs and 4 points on his record. And DMV records will not say that he got the points on his bike ! 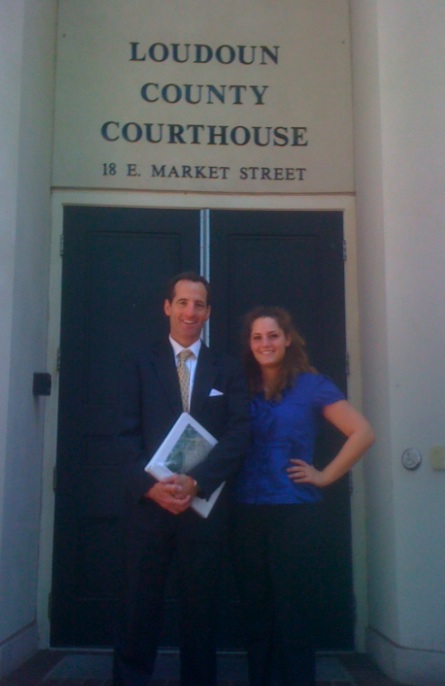 While he devotes most of his time and firm’s resources to helping injured cyclists, victims of catastrophic injuries, people hurt on the job and those seeking their Social Security Disability benefits, Landau represented two of the cyclists this morning in the Loudon County District Court, both of whom plead “not guilty” to the charges. But before the judge called the case up, Mr. Landau had reached an agreement with the prosecutor. Both of his clients pleaded guilty to having insufficient reflectors/lights on their bicycles (Va. Code 46.2-1015), which resulted in a much smaller fine, court costs and no points for a moving violation.

Landau offered to represent these bicycle riders “pro bono,” (at no charge to them). The “Triathlon Trial Lawyer” felt strongly that the bikers should not have been ticketed for making a rolling stop that day in the Lovettsville and Purcellville. Members of the ABRAMS LANDAU trial team accompanied the experienced personal injury attorney, who is shown here with Danielle, who is assisting for the summer. The Leesburg, Loudoun and Fairfax Injury lawyer will also be meeting with bikers and cyclist advocacy representatives over the next week in Reston, Winchester, Colonial Beach and Washington, D.C., before heading to San Francisco for the Annual national trial lawyers (American Association for Justice) convention (and Bicycle litigation group meeting)