When you are injured in a car crash or on the job, your doctors send you and your insurance company medical bills based upon the value of their services. When the insurance company receives these bills, whether they are from your health insurance company, car insurance provider or your employer’s workers’ compensation insurance carrier, these companies almost never pay the full price.

In fact, many of these companies employ other companies to contest and reduce the amount they eventually end up paying. You can see an example of this in the picture of an actual airline attendant client’s billing statement below: 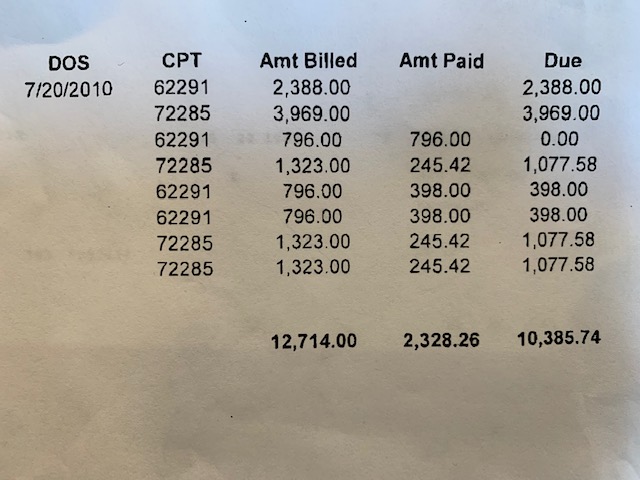 This client was injured on board an aircraft while working for a major airline. She sustained a significant injury to her neck that required surgery to her cervical spine. Then, years later, she needed surgery to her shoulder as the result of the same injury inside the aircraft. She had permanent disability. In fact, this young woman received all 500 weeks, the maximum allowed, under the Virginia Workers’ Compensation laws as the result of her workplace accident. Nevertheless, despite her decades of service to the airlines and the permanently disabling and disfiguring injuries she sustained, her employer’s insurance company paid only about 1/6 of the total bill. You can see that while the workers’ compensation carrier paid one of the bills in full, the majority of them were slashed significantly.

What does this mean?

It means that some doctors, hospitals and other healthcare providers are becoming reluctant to treat those hurt on the job, or those who cannot pay the full bill out-of-pocket. Secondly, it means that doctors have to employ numerous staff members to fill out different forms for different insurance companies, fight with them when there are delays or denials, and even retain expensive counsel to fight for the bills that may be many months, or even years, old.

One good piece of news under Virginia law is that if a doctor accepts the amount paid by the insurance company, they are not allowed to seek the rest from the patient, or injured worker. In other words, “balance billing” is not allowed under Virginia Law. This means that in the example above, the spine surgeons could not see the additional $10,385.74 from the injured airline worker if they accepted the $2,328.26.

Nevertheless, many injured airport and airline employees find that they receive dunning letters, calls from collection companies, and other threats, even when they are under the protection of the workers’ compensation Award, because of the huge differential between what is billed and what is ultimately paid months and months later. Because of the “time value” of money, many doctors and medical practices lose money when these sorts of games are played. However, the insurance company understands that since an employee can only get 500 weeks of Workers’ Compensation wage loss benefits in Virginia, and there is a maximum weekly compensation payment rate, the real wildcard in terms of how much they may have to pay on a claim is on the medical side of the file. That is where the workers’ compensation insurance company’s exposure to pay is really found in serious, permanent injury cases. This is something they try to manage very carefully, as the insurance adjusters are in the business of “risk management.”

Working with an experienced injury lawyer will enable you and your family to navigate the difficulties often posed by insurance companies who are seeking to avoid paying the full amount of the medical bills, delay payment of any kind and/or to avoid payment altogether.