Anyone who has ever seen attorney Doug Landau racing on his bicycle knows that he always has at least one hand on the handlebars. Unless he is about to dismount into transition, he also has both feet on the pedals. He does this for safety, control of the bike, and because he doesn’t believe in taking unnecessary chances and incurring needless injury. Landau often laughs when he sees cyclists throw up their arms at the finish of a road race, because he knows that if he did that, he would crash shortly after the finish line.

Lawyer Landau was amused to see the humorous picture in Trial Magazine’s September issue. It was an illustration regarding an Illinois prohibition on “trick riding” that has been on the books for almost 40 years. The ordinance states “no rider of a bicycle shall remove both hands from the handlebars, or feed from the pedals, or practice any acrobatic or fancy riding in any street.” 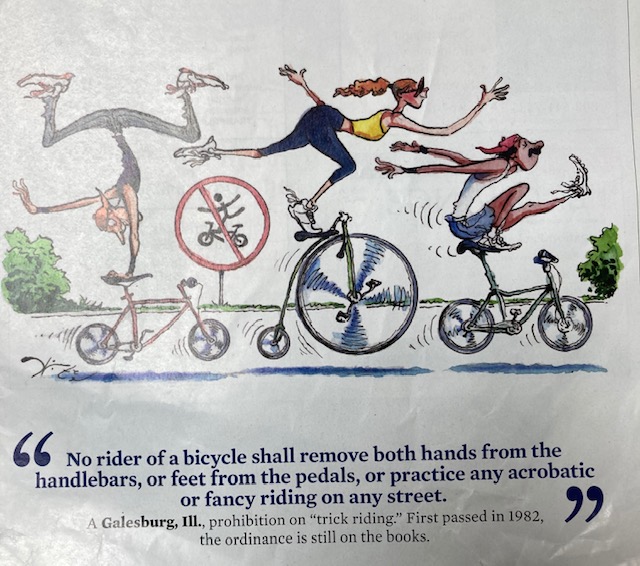 This ordinance does not seem to ban this type of activity in someone’s yard, in a private park, or other location where the danger of cars is not as apparent. Landau has seen trick riding and stunt jumping on bikes, and he has taken a pass on participating in those activities. He even has a young relative who does indoor BMX racing, which is right up there with trick riding for likely crashes and injury.

However, Landau notes that if you don’t have your hands on the handlebars, you cannot brake and it’s a lot harder to turn to avert a sudden and unexpected danger. Likewise, for those bicycles with pedal brakes, no feet means no breaks.

Bottom line, if you want to try tricks, stay on soft services, so if you fall or crash you will not be injured. If you were on the W&OD Trial, or roads where there are cars, discretion is the better part of valor. Save the tricks for another time and place.

If you or someone you know was severely injured due to no fault of your own while you were bicycling, running or driving, please give us a call (703-796-9555) or email us at Abrams Landau, Ltd. and we will try our best to help you receive the compensation you deserve.