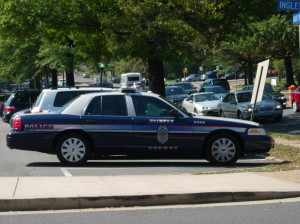 This morning I was passed on the right hand shoulder. not by a police car or emergency vehicle, but by an aggressive, dangerous motorist. Police in Fairfax County say as the days get longer and the weather gets warmer, they often see an increase in complaints about drivers getting more aggressive behind the wheel. News reports police in Fairfax’s Reston district are in the midst of a two-week aggressive driving patrol. They’re focused on catching drivers cutting other cars off, blocking intersections, and of course, speeding. Bicyclists are particularly at risk when drivers pass illegally or engage in “gridlock.” Reston Herndon bike accident lawyer Doug Landau advises early season cyclists and pelotons to be extra vigilant during early season rides.

Officer Jeff Neach pulled over five drivers before 8 a.m. Wednesday morning: one was cited for passing in the shoulder lane on Route 7. Neach says aggressive driving is when one driver puts others in danger just so he or she can get where they’re going faster. “Maybe they’re used to being first or getting their way, and they’re out here jockeying for positions on the roadway and don’t realize what they’re doing can be wrong,” he says. Police here have issued more than 270 tickets since March 15th.