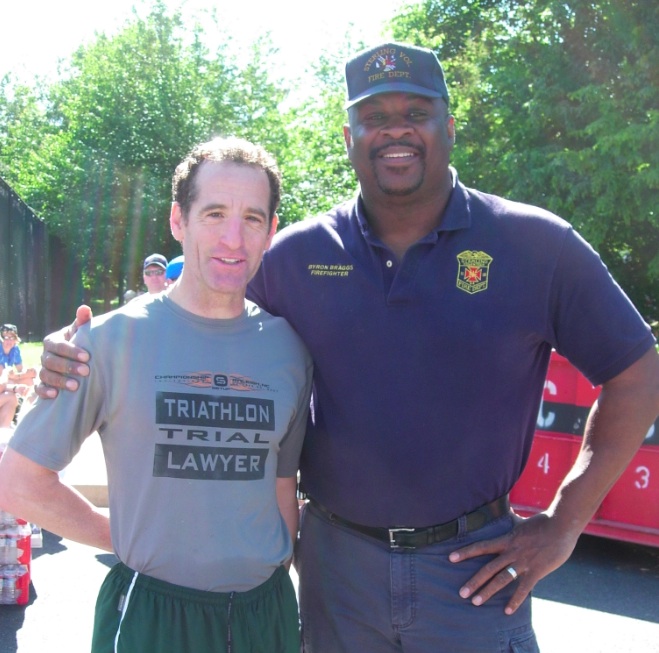 Once again Doug Landau took part in the Cascades 10km. (6.2 miles) running race in Sterling, Virginia over the Memorial Day weekend.  A tough, rolling course on a beautiful course with Outback Steakhouse and other delectibles made for a great start to a terrific weekend.  Shown here with a Sterling Fire Department race volunteer, the Triathlon Trial Lawyer got an ice water shower to help cool off after crossing the finish line.  Because it is important to give back to the community, not only money but time and effort, Doug Landau will be a volunteer next week at the Reston Interfaith’s fundraiser.  He will be assisting at Lake Newport Pool at the Reston Sprint Triathlon registration May 31st.  On June 1st, Landau hopes to repeat as an Age Group Champion, as he finished 8th overall in 2007 and won the 45-49 Age Group en route to winning that grouping in the competitive state-wise “Virginia Triathlon Series” in October.  While not registered for the series in 2008, Abrams Landau trial lawyer Landau hopes to give full value in this and the other races he has entered.  Doug also will be a volunteer again at the Reston Triathlon in September, though this year he will also race, as it’s the 25th anniversary of this wildly popular event.