Suspended over the circus ring, 8 Ringling Bros. and Barnum & Bailey performers fell to the ground when their apparatus failed during their act.  The performers fell 25 to 35 feet, sustaining broken bones and shocking onlookers.

Injuries Can Be Catastrophic

Having represented other Ringling performers from around the world who have sustained permanent injuries from on-the-job accidents, Herndon attorney Doug Landau was not surprised by the severity of the losses to these highly trained professionals.

”Part of the allure of these acts is the danger,” notes Landau. “If the man or woman on the street could perform these stunts, they would not pay to see the circus.  We have represented world class athletes from across the globe who have performed for Ringling and its related shows (which are owned by Feld Entertainment).  These remarkable performers’ athleticism and daring makes for spellbinding shows, AND catastrophic injuries when things do not go as planned.  Our hope is that they each recuperate quickly and return to their roles fully healed and with safety protocols in place.” adds lawyer Landau.

Ringling Legal Disputes Must be Handled in Virginia 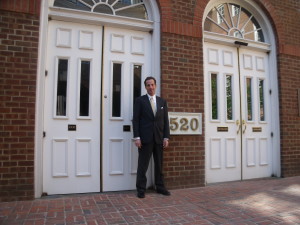 According to news reports (and disturbing video), the eight performers fell during a show in Rhode Island when the hair-hang apparatus, which holds the circus performers by their hair in this unique feature act, may have failed. Another performer was injured on the ground.  Fortunately, no spectators were hurt. The circus performers were among 11 people hospitalized with injuries related to the accident.

“Even though they were all hospitalized in Rhode Island,” Landau noted, “because Ringling Bros. is headquartered here in Bailey’s Crossroads, Virginia, the performers’ workers compensation claims will likely be heard in Northern Virginia, outside of Washington, D.C..   This is true even in cases where the circus workers were injured while performing in New England or while training at their Florida facilities, or even in Japan, France, or on the trains in transit elsewhere !”

Performers Must Understand their Rights

Having tried Ringling Bros. Circus injury cases for clients from Florida, Nevada, New York, and even Australia (see earlier post), Doug Landau notes that most Circus performers have never read their entire contract and most do not know their legal rights, especially under the restrictive Virginia Workers’ Compensation Act.

Landau predicts, “As for any lawsuits on behalf of the performers, they are probably precluded from bringing a case against their employer because of the “umbrella protection” of the Virginia Comp Act. On the other hand, if post-accident investigation reveals a defect in the product caused the fall, or negligence on the part of an outside maintenance company, there may be ‘third party liability,’ but any such claim will have to be coordinated carefully with the injured circus workers’ compensation claims. The injured Ringling Circus performers will hopefully soon be under the protection of Awards through the Virginia Workers’ Compensation Commission with the help of capable and experienced counsel.”